Myrrh is a type of natural gum or resin, which means dried tree sap. It can be made from several species of small, thorny tree native to parts of the Middle East and Africa, the most common of which is Commiphora myrrha. The resin is extracted by making cuts in the tree through the bark to the sapwood. The sap then rises to the exterior of the tree and hardens, much as a wound would scab over in humans. The resin must be allowed to fully harden following harvest, and can then be used to make oils and perfumes, or burnt as incense. 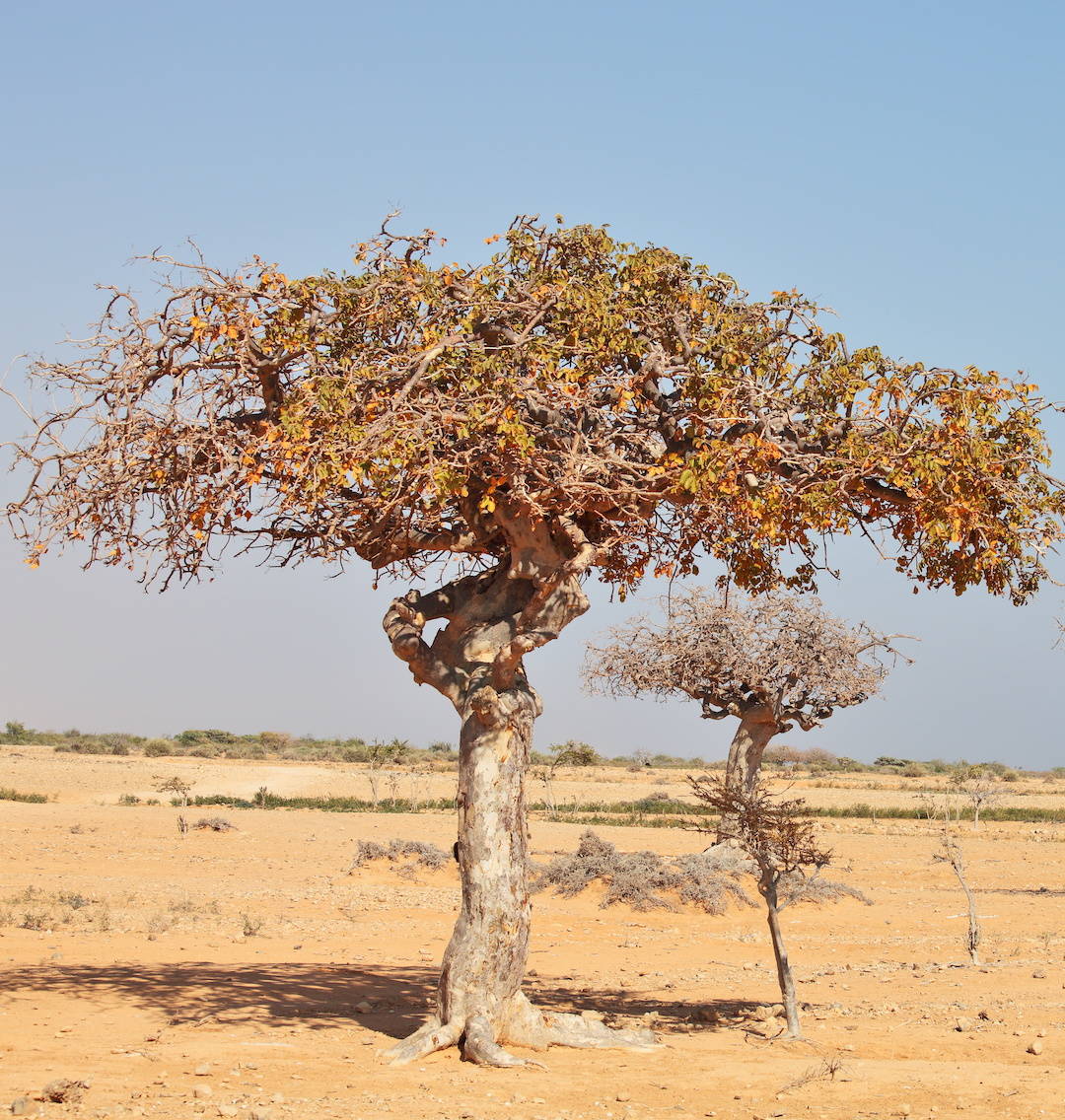 Fresh myrrh looks similar to another more commonly recognized tree resin, amber. Like amber, it is a rich honey color with a high degree of translucence. As it is not a rock or crystal, it does not have a regular shape or structure and can be ridged, lumpy or jagged. As the amber ages, it grows both darker and more opaque, eventually becoming entirely brown.

Myrrh resin, myrrh oil, and myrrh burnt as incense all smell different, but are universally termed rich and complex. The resin has both sweet and bitter notes, with a dark fruitiness like plums or figs. Myrrh oil has a warm scent that is earthy and woody and more faintly sweet. When burned, myrrh gives off a piney, bitter smell (which is why it’s been used to balance the sweet, citrusy scent of frankincense since before biblical times). 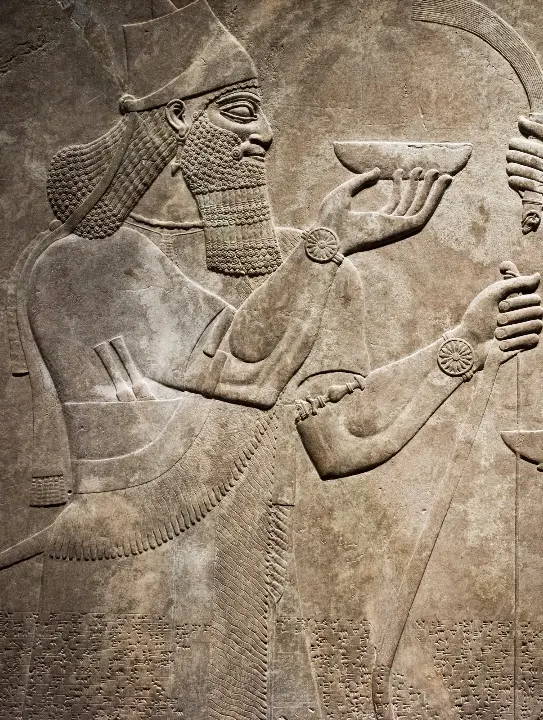 Myrrh has been not only used, but prized, continuously for millennia, with its earliest recorded use in Babylon and Assyria some 5000 years ago. Despite differences in culture and religion, myrrh has been associated with the gods (or god) across most ancient civilizations that knew of it.

Owing to fundamentally different understandings of the relationship between the spirit, the body, and the senses, ancient peoples saw a connection between their senses and prayer, and between the gods and healing, leading to a variety of what we today would view as nonsensical applications of a divine substance.

For instance, myrrh was burned as an incense during religious worship as an offering to the gods or incorporated into ‘purifying’ ceremonial anointing oil. It was also seen as having healing properties as a result of its divine connection and used in some medicines, which included salves and other topical applications or as a spiritual tool in prayer and fumigation. Finally, it was used in fragrances and cosmetics to bring the individual closer to the gods, to provide holy cleansing of the body or soul, and/or to assert the individual’s connection to the divine.

Thus, myrrh is mentioned as an ingredient more than any other substance in the medical texts of Greek physician Hippocrates from the 4th century BC; was one of the most important embalming agents for Egyptian mummies across the practice’s 3000 year history; and is mentioned in both the Old Testament (2nd and 12th century BC) as a main ingredient of holy anointing oil, as well as one of the gifts given to Jesus in the New Testament from the 1st century AD.

Incense in general, and myrrh in particular, continued to be used as part of religious worship in both the western Catholic Church and the Eastern Orthodox Church through to the present. At least until the Middle Ages, the ancient belief in the healing properties of incense and the ability to ward off disease “miasma” through healing smells persisted. Myrrh, an increasingly distant and therefore valuable import, continued to be mentioned as a key ingredient in incense recipes in Europe through at least the 8th century, and in the first European cosmetics treatise from the 12th century.

Myrrh even made it as far as India in antiquity and China in the 7th century and was incorporated into both Ayurvedic and traditional Chinese medicines.

How is myrrh used today?

In addition to the other uses mentioned above relating to purification and perfume, myrrh was historically used as an antiseptic, antifungal, and wound healing agent (owing to its slight astringent properties).

Today, myrrh is still used by various Christian denominations as a traditional incense and in many perfumes. A tincture derived from myrrh is also used as a component of various dental remedies and mouthwashes, ointments, paints, and coated tablets in Europe and the US, while its traditional uses in Ayurveda and traditional Chinese medicine persists. 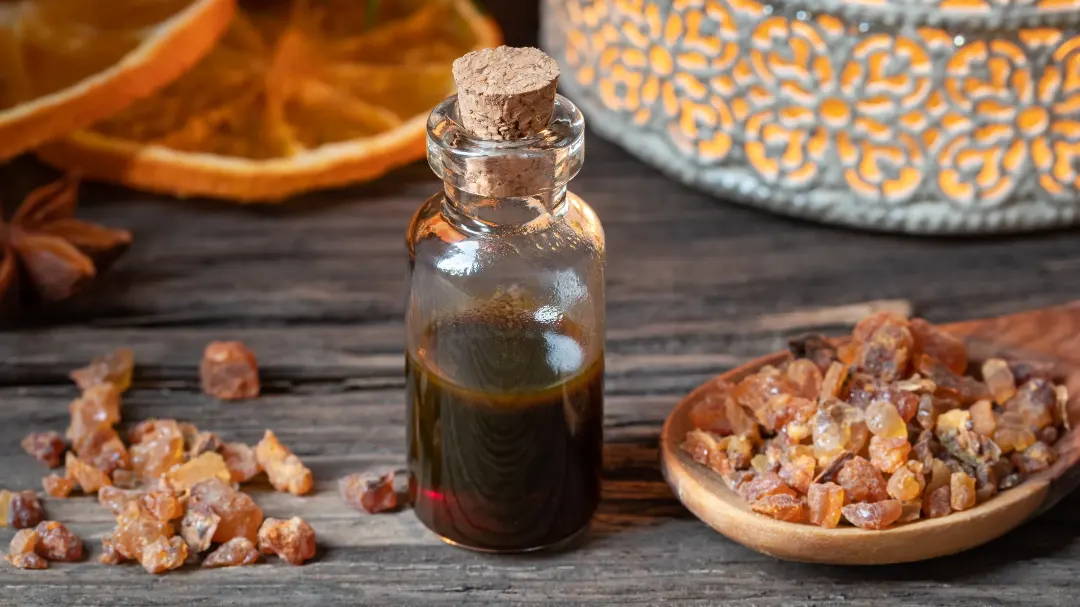 As a cosmetic preparation, myrrh oil is sometimes used for skin, mostly to combat fine lines and wrinkles or acne. Myrrh oil may have an impact on aging skin owing to its antioxidant content and astringency. Myrrh may also have anti-inflammatory properties, with some evidence supporting this, but nothing conclusive having yet been demonstrated. Should this prove the case, myrrh would act on both major symptoms of acne, by reducing inflammation and healing wounds, while its antiseptic and antifungal properties could potentially reduce bacterial and fungal growth.

Although research on its use is scant, there is significant anecdotal evidence that myrrh promotes stronger, less brittle and less ridged nail growth when applied to nail beds and cuticles. This is likely due at least in part to its moisturizing properties and ability to combat bacteria and fungus, but more research is needed to establish why myrrh has this effect.

* Comments must be approved before being displayed.
Previous
Next